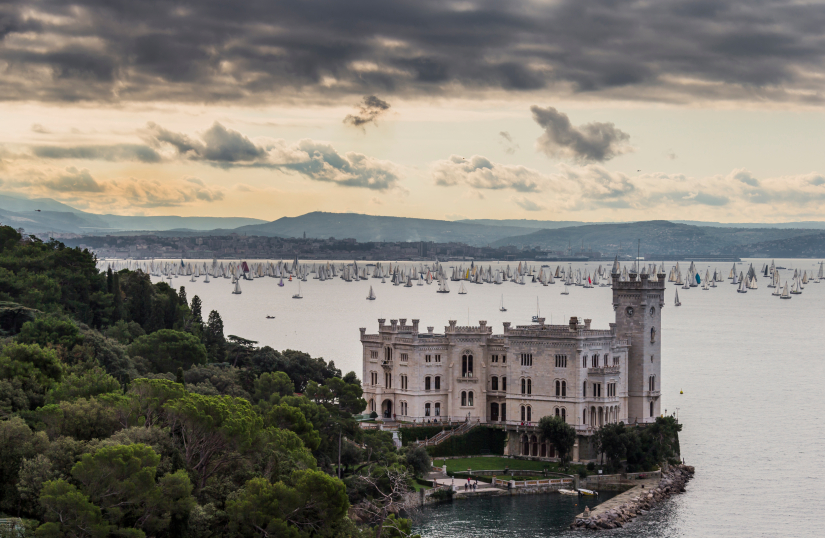 There is a city in Italy where the sea plays an important role: it’s the protagonist of the main plot, it’s part of the central square and so of the town’s history. This town is called Trieste and its situated on the Eastern border of Italy, up in the North, not far from Venice.

Every year, on the second Sunday of October, this town puts itself as stake organizing the greatest regatta in the world. Last year almost 3000 sail boats were navigating in the gulf of Trieste. The starting line itself is a must see: it is the beautiful Miramare Castle, a white neomedieval castle that rises right on the coast of Trieste. It used to be an Aburgic summer residence, and now it is a beautiful museum with a public parc of 22 hectares, decorated with countless types of plants.

The route of the regatta proceeds South towards the central square of Trieste, piazza Unità. This square is the biggest – and greates ndr – square on the sea in Europe. Thousands of people passionate of sailing come to the square to witness the finish line of the regatta. More others reach the high parts of the coast for a more wide  view of the coast and the sea.

Even for someone who is not a passionate sailor, this spectacular event is something special to live and to be part of. And discovering this city is one of the perks of traveling there for this great event.

In 2012, Lonely Planet listed the city of Trieste as the world’s most underrated travel destination.

Elegant and delicate, with an Habsburg vibe, but also rich in traditions and authenticity, it is a city enriched by the encounter of different people and cultures.